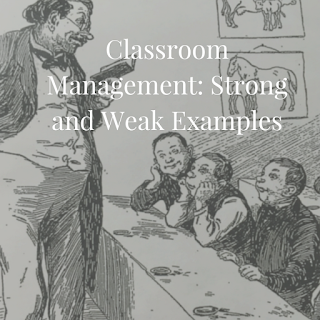 The following is a list of representative observations or behaviors developed by Veritas School teachers during our discussion of the 'skilled in managing classroom procedures' item on our Characteristics of Teaching Excellence.

In Philippians 1:9, Paul writes that it is his prayer for his readers that their “love may abound more and more, with knowledge and all discernment, that you may approve what is excellent”. This encapsulates well our goal for our students at Veritas. We desire that they will grow in wisdom, virtue, and godliness through their years with us, that their love for God and for others would abound. Ours is not merely an intellectual enterprise, but one in which learning is directed toward an end that is greater than academic achievement. As such, we must consider for what purpose we are learning, and any limits or boundaries of that learning. The purpose of learning is, like everything else in life, to move us closer to loving God with all of our hearts, minds, souls and strength, and our neighbors as ourselves. Anything else, any other motive, moves us away from that and therefore from our true purpose.

C.S. Lewis writes in The Abolition of Man about his desire for a kind of learning that “would not do even to minerals and vegetables what modern science threatens to do to man himself.” He warns against the modern approach to education that tends toward an emphasis on power and control, rather than toward humility and gratitude. In this he is echoing a concern found in sources as different as Augustine, John Milton, and even Mary Shelley. It is an enduring problem because learning, like all things human, can be made to serve and to glorify the living God or it can be bent to serve the whims of fallen man. Too often, of course, the latter has been the case.

We find this problem frequently described using the terms curiositas and studiositas. Not all desire for learning is appropriate or lawful. Curiositas, instead of meaning a healthy wonder, was used describe a vice that desired knowledge that is novel, or an appetite that is prideful and is intently interested in knowing for its own sake, with possessing knowledge in a way that gives control or power to the knower. It is intensly selfish, and while the ‘curious’ in this sense may discover useful things, they do not acknowledge the source. There is no gratitude for the gift or the giver. Augustine writes that the ‘curious’, rather than loving and being thankful for knowledge, actually “hate the unknown because they want everything to be known and thus nothing to remain unknown.” They cannot abide the fact that, ultimately, mastery is impossible. It is simply not possible to fully plumb the depths of the creature let alone the Creator.  Creation is a constant reminder to man that he is a limited and fallible creature. This is hateful to the ‘curious’, and so they end with hating the creator of it all. The object of curiositas is control and power, and its result is ultimately unbelief.

Milton also warns against the desire for knowledge that is inappropriate, that is, not regulated by virtue. In Paradise Lost, Adam and the angel Raphael have a long discussion that ranges from the history of the cosmos to the war in heaven between the faithful and fallen angels. In this discussion, Adam learns much and the angel commends his desire to understand more about God and his ways. But there is a potential danger that Raphael presents to the unfallen Adam. After approving Adam’s questions about the working of the universe, the angel gives this direction: “…the rest from man or angel the Great Architect did wisely to conceal and not divulge his secrets to be scanned by them who ought rather admire.” Milton says here through the angel that people, in our desire to understand, need to be careful that this knowledge leads us to admire God and not just to analyze (‘scanned’). To understand is to worship. This is the essence of ‘studiositas’. It doesn’t mean what we mean by the contemporary word studious, someone who merely has their nose in a book all the time. The ‘studious’, in the older sense, understand that the fear of the Lord is the beginning of wisdom. Studiositas looks for permanence, an eternal perspective that inspires astonishment and joy. It is a virtue that seeks the sublime rather than the mundane, and it leads to devotion, wonder, and gratitude for both the creature and the Creator. The result is worship, and a practical wisdom that both glorifies God and relieves somewhat the present suffering of this fallen world, as an act of service.

Interestingly, the two approaches to learning are well described in Mary Shelley’s early 19th century  novel, Frankenstein. Early in the novel the author contrasts the student (and later creator of the novel’s ‘monster’) Frankenstein’s approach to learning to that of his future wife (his ‘companion’ in this passage):
While my companion contemplated with a serious and satisfied spirit the magnificent appearance of things, I delighted in investigating their causes. The world was to me a secret which I desired to divine. Curiosity, earnest research to learn hidden laws of nature, gladness akin to rapture, as they were unfolded to me, are among the earliest sensations I can remember.

Frankenstein here begins a gradual descent into an uncontrolled vice to possess “the secrets of heaven and earth”, and he pursues this to his “utter and terrible destruction”. In this pursuit he neglects all duty, abandons his friends and his family, and is completely consumed with his desire to know the secrets of life-giving spirit. This neglect, of course, is a clear sign that this activity is destructive, not virtuous. As Frankenstein later says,
A human being in perfection ought always to preserve a calm and peaceful mind and never to allow passion or transitory desire to disturb his tranquility. I do not think that the pursuit of knowledge is an exception to this rule. If the study to which you apply yourself has a tendency to weaken your affections and to destroy your taste for those simple pleasures in which no alloy can possibly mix, then that study is certainly unlawful, that is to say, not befitting the human mind.

Of course, the opinions of a Romantic novelist are not normative for us, but Shelley has the unhappy Frankenstein give an important warning that we would be wise to heed, about an unbridled, unrestrained lust for knowledge and power. At Veritas, we certainly want students to be curious in the contemporary meaning of the term—interested in many things and learning from a sense of wonder—and classical, Christian education is clearly not anti-intellectual. We joyfully recognize that all wisdom and learning flow to us as gracious gifts from the Father. But all of this, whatever we learn, ought to be guided toward the fear of the Lord that is the beginning of wisdom.

Knowledge is a magnificent, astonishing gift, and accordingly, the pursuit of wisdom should be a virtuous and godly undertaking. The purpose of learning is to grow to love God with all of our hearts, minds, souls, and strength, and to love our neighbor as ourselves. This is ‘studiousness’, the satisfying of our desire for the sublime and the great, found only in knowing God rightly.

Fidelity to the school’s mission, as well as clear and purposeful leadership, are critical components of a successful school. But it is the teachers in the classrooms, exceeding the mission with students day after day, who make a school great.

Bryan Lynch
Newberg, Oregon
Bryan is Academic Dean (and former Headmaster) of Veritas School, a PreK-12 classical and Christian school in Newberg, Oregon. He was a founding board member of Veritas, and has been in private and public education for over 30 years. In addition to his administrative duties, Bryan teaches Rhetoric and Humane Letters. Bryan leads teacher training for schools on harkness discussions, the Four Foundations, and other areas. He has presented many workshops on classroom teaching, faculty development, formative assessment, and harkness/seminar discussions at Association of Classical and Christian Schools and Society for Classical Learning conferences, as well as leading numerous regional teaching conferences at Veritas. He is a frequent accrediting administrator for the ACCS.

When I played baseball as a kid the most tedious (and longest) part of practice was batting practice. This generally consisted of one pla...

I'm available to assist schools and teachers by phone or in person. Contact me at blynch@veritasschool.net