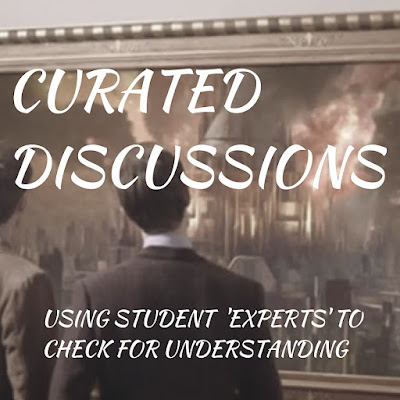 A Curated Discussion is a simple but effective activity that involves all students in taking the role of a temporary expert in small groups.

Curated Discussions have some great features:

Example of a Curated Discussion:
In my Rhetoric I class students apply principles of judicial speech from Aristotle's Rhetoric to three Old Testament crimes (i.e. Caine's murder of Abel, David's adultery with Bathsheba and murder of Uriah, and Haman's attempted plot against the Jews--credit to Jim Nance of Logos School).

After having previously worked through one of the situations individually, students were divided up into three groups, and each group was given one of the crimes  to work with.

The groups discussed the main questions for their crime and presented their analysis and answers on large sticky notes, which they placed around the room.

Fidelity to the school’s mission, as well as clear and purposeful leadership, are critical components of a successful school. But it is the teachers in the classrooms, exceeding the mission with students day after day, who make a school great.

Bryan Lynch
Newberg, Oregon
Bryan is Academic Dean (and former Headmaster) of Veritas School, a PreK-12 classical and Christian school in Newberg, Oregon. He was a founding board member of Veritas, and has been in private and public education for over 30 years. In addition to his administrative duties, Bryan teaches Rhetoric and Humane Letters. Bryan leads teacher training for schools on harkness discussions, the Four Foundations, and other areas. He has presented many workshops on classroom teaching, faculty development, formative assessment, and harkness/seminar discussions at Association of Classical and Christian Schools and Society for Classical Learning conferences, as well as leading numerous regional teaching conferences at Veritas. He is a frequent accrediting administrator for the ACCS.

When I played baseball as a kid the most tedious (and longest) part of practice was batting practice. This generally consisted of one pla...

I'm available to assist schools and teachers by phone or in person. Contact me at blynch@veritasschool.net